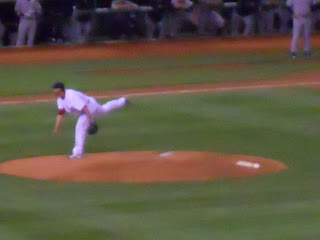 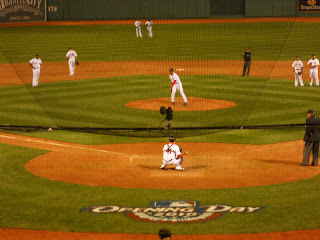 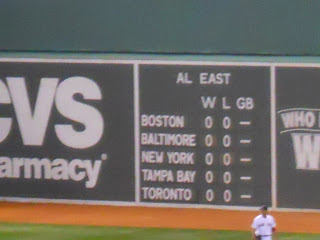 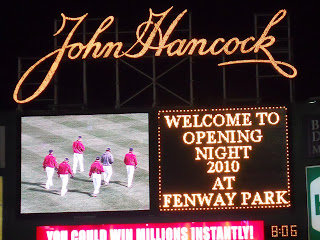 For the first time in 12 years, I went to Opening Day at Fenway. Opening Day is important not only to baseball fans, but to those looking for an end to the long winter. Opening Day is different. All 30 teams are in first place and every team has hope. Every ballpark is filled to capacity with fans playing hooky from work or school. For me, the Opening Day game means just that; the season's first game played during the day. Twelve years ago my friend Eddie and I went to Opening Day on a cold April afternoon and watched the Red Sox and Pedro Martinez take on Randy Johnson and the Mariners. I remember many things from that day. The two things I remember most were Mo Vaughn hitting a game winning grand slam in the 9th inning, and the ban on beer because Opening Day was on Good Friday. Pretty amazing that a city which enjoys its spirits as much as Boston would ban the sale of booze on such a high holiday like Opening Day(Uh I mean Good Friday).

This year Opening Day felt different in many ways, some good some not so good. I didn't love the fact that the game was being played on Easter Sunday at 8PM. There are a number of reasons I wasn't thrilled about this, but the main problem that exists with any night game at Fenway is the ineptness of an organization know in these parts as the T. Now that I live Marlboro, I was presented with the decision to battle Easter traffic for 30 miles into the city, or take the commuter rail from Southboro into Yawkey station. The problem is of course that the last train from Yawkey back to Southboro runs at 11:10PM, or in terms of primetime Red Sox-Yankee ballgames, the 7th inning. I chose the latter and my wife and I took a pleasant ride on the train into the ballpark. After the Red Sox had tied up the game in the bottom of the sixth, the Yankees retook the lead in the top of the 7th. From here we had to leave to catch the last train. As we walked up Yawkey Way out of Fenway, I heard the crowd roar for what turned out to be Dustin Pedroia's game-tying two run homer. We arrived at Yawkey Station next door and proceeded to wait one hour for the last train. In the ultimate wisdom of the MBTA, they decided to run the train 40 minutes late to accomodate fans at the game. The problem was fans who left the game early to avoid being stranded in this wonderfully-run city, missed the last 3 innings of action and a 9-7 comeback win for the Sox. The fans who stayed got stranded because the last train arrived in the bottom of the eighth inning with no more trains leaving for the western suburbs after the game. So even when we win, we miss out. Thank you MBTA. Some other things I didn't care for: Neil Diamond's half-hearted rendition of Sweet Caroline, or even Sweet Caroline for that matter, obnoxious Yankee fans,the guy in front of me complaining about the walk up the stairs, and Yankees Suck chants(Do we have any originality left?)

What did I like you ask? Well, going to Opening Day for one. The temperature was reminiscent of a night in August, not April. The buzz around the ballpark is unbelievable, and Fenway always seems to open up new areas for fans to congregate, indulge in new food or alcohol choices, and stretch their legs from being cramped in seats that are smaller than those found on airplanes. Do you think Kevin Smith has to buy two game tickets? The game was also against the Yankees, and the energy and excitement is always higher than when other opponents come here. The games are always competitive, exude a playoff atmosphere, and the rivalry is still unmatched in sports today. Yankee fans were louder than ever coming off their World Series title. There was even a fan next to us wearing a WWE championship belt. He must have invested a lot of time coming up with that idea.I loved seeing my favorite pitcher Pedro Martinez throw out the first pitch. His arrival started the Red Sox on their successful run of winning seasons that is still intact. Nobody put on a better show on the mound either. There were traditional figures honored such as Johnny Pesky, and untraditional guests such as Dr. Dre. One of the most original ideas was bringing 5 year old Joshua Sacco performing his rendition of Herb Brooks 1980 Miracle On Ice speech. "I'm sick and tired of hearing about what a great team the Yankees are," he yelled. "Screw em. Tonight is your night." Couldn't have said it better myself.
Posted by MattyT at 10:28 PM