Pros and Cons of PNC Park in Pittsburgh

PNC Park in Pittsburgh is simply the best new ballpark out there. If I lived in Pittsburgh I would consider buying season tickets just to enjoy warm summer nights at this ballpark. The Red Sox made their second trip to PNC since it opened in 2001. My wife and I followed bandwagon of Red Sox fans to PIttsburgh. Here are the good and bad of PNC. I'll start with the good:

Unmatched by any park in baseball, even San Francisco's AT+T Park which has a spectacular view of San Francisco Bay and the Bay Bridge. PNC fits perfectly into a nook of the downtown skyline across from the Allegheny River. The sunset reflecting off the glass towers from the west offers a spectacular scenic overlook at dusk. At night, the Roberto Clemente Bridge lights up the view past Center Field and meshes perfectly into the downtown skyline. Judge for yourself. 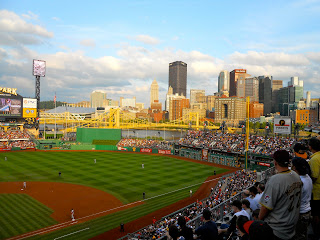 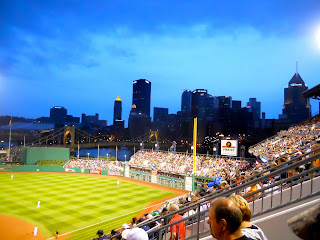 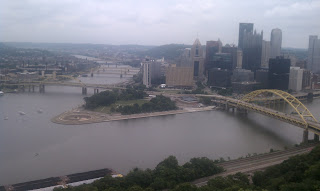 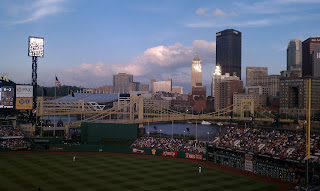 2) The History:
The Pirates have more than 100 years of history and there are many ways to experience. First, the most important member of the Pirates history Roberto Clemente is honored with a statue, a bridge, and 21 foot high wall in Center Field in honor of #21. There are statues of Willie Stargell, Honus Wagner, and Bill Mazeroski after hitting his famous 1960 World Series home run. We also sat in the Pittsburgh Baseball Club Premium seats where legendary broadcaster Bob Prince is honored with his signature plaid jacket. Known as "The Gunner" the area has great concessions named after the broadcaster too. 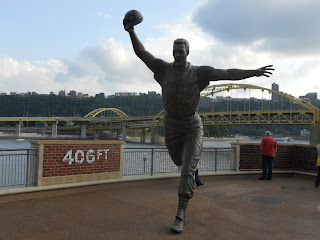 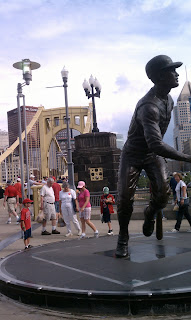 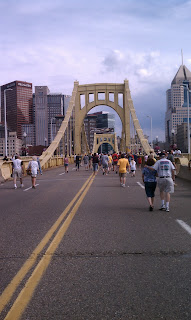 3) Food and Concessions
As good as anywhere in baseball. Contrary to most opinions, I like Iron City Beer and the fact that it's similar to Bud and Coors Light. It's available all over the park. Yeungling is also a good local choice. There are Primanti Brothers Cheesesteak Sandwiches with cole slaw and fries on the sandwich if you can stomach it. They also have capicola and roast beef sandwiches done the same way. Just a warning, the steak is more like meatloaf than steak. Very good though. Gunners foot long hot dogs are huge, beefy, tasty and can be topped with whatever you want. There's also Manny Sanguillen's barbecue in the outfield concourse and a concession area dedicated to Willie Stargell's favorites Called Pop's Plaza. Try as much as you can, PNC goes all out to showcase local specialties. Don't forget Quaker Steal and Lube, another local specialty at the park. It was voted Best Wings in America.

4) Customer Service
We paid $94 for 2 club seats. Try doing that at Fenway. We also got a tour of the club, all the concessions, and some historic Pirate memorabilia. Our sales rep Don couldn't have been nicer, and did everything he could to make sure we had a great day at the ballpark. Not bad for being a fan of the visiting team.


Fireworks after the game and plenty of options around the park and across the Roberto Clemente Bridge. Doesn't get any better than that. We went to Jerome Bettis Grille. Great pre and post game food and drink. We took a boat up the Allegheny River back to our car. What a great way to go to a ballgame. No traffic, and they have cocktails for the 15 minute ride there. 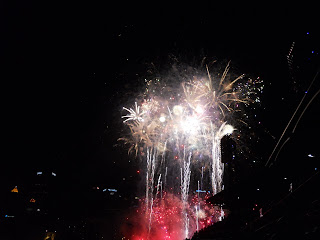 Nothing about the experience other than the Red Sox whining about National League rules in addition to their poor play. Unfortunately for Pirate fans, the Bucs have had 18 consecutive losing seasons with number 19 on the way. It's a shame because this looked a breakout year for the Bucs as they were in first place on July 19. Hopefully there are better things in store for this franchise that plays in such a beautiful ballpark.

Posted by MattyT at 3:52 PM No comments: