“It’s Good To Be Back.” That was the NFL’s tagline after the recent work stoppage that lasted through the summer and nearly wiped out the season. Now that a week has passed since the Red Sox’ historic collapse, it’s time for football, and not a moment too soon. Teams are assembling, members are honing their skills, and stars are showcasing their talents, and that’s just in the parking lot. Nobody is happier than tailgaters that the NFL season is back. Tens of thousands of loyal fans stocked pickups, RVs and sedans to enjoy Opening Day at Gillette Stadium. They come from long distances and all New England states to enjoy this Sunday ritual. Here are a few of New England’s most talented tailgaters.
There are tens of thousands of tailgaters filling the parking lots of Gillette Stadium as early as noon for a four o’clock kickoff. The most elaborate tailgate setups occur in the lots outside the stadium. The area behind the Foxboro Terminals warehouse is a great place to start when looking for New England’s best tailgaters. Jerry Shanahan of Rockland and John Travers of Plymouth have been coming to games since Foxboro Stadium first opened in 1971. They met during the pre-game celebration for the infamous “Snow Bowl” playoff game against the Raiders in 2002. Now that they have joined forces, their group totals more than 30 friends, and they always park in the same spot for each game. This celebration started before 11 a.m. when Foxboro Terminals opened their expansive lot to these hearty souls. Their food spread changes each week, but featured this week were pork tenderloin, spicy Italian meatballs, and lamb chops. It was a delicious lineup of choices for sure, but their tailgating equipment is what’s most impressive. Winnebagos and service vans covered in Patriots logos and flags mark their territory of roughly a half dozen spaces. High definition televisions, generators, a Patriots beer pong table, two full sized grills, a slow cooker, a turkey deep fryer are the essential tools to making this tailgate work. The most important ingredients to creating the perfect tailgate are camaraderie and doing your job. It’s important to Bill Belichick on the field, and it’s important to tailgaters in the parking lot. “We meet in Plymouth at 7 a.m. for a one o’clock game,” Travers said. “If you’re late, you’re out. Each person has something to bring, and something to prepare. It’s a total team effort.” There are occasional bumps in the road. The group has run out of gas on the road, and forgot tickets in the past. But working together helps things run smoothly for this large group of South Shore tailgaters. Camaraderie among friends was a common theme at most tailgates, and one of the most talented members of this group created a cartoon caricature of the entire group and posted it onto two of the vehicles to show how tight this group is. “In a lot of ways, the tailgate is the event,” Travers said. “It’s a great way to meet people.” 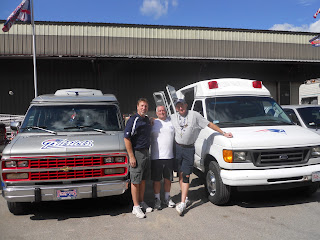 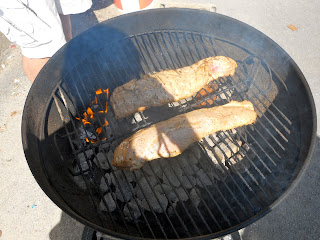 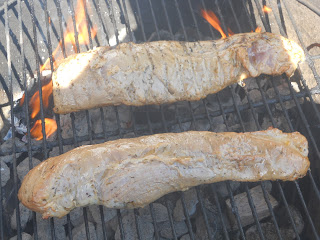 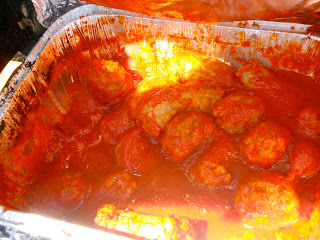 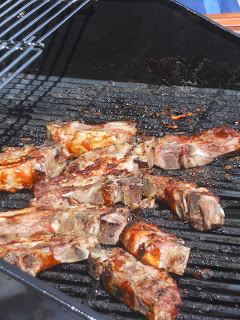 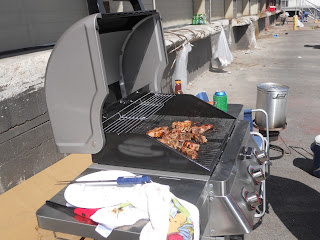 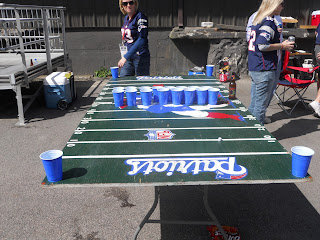 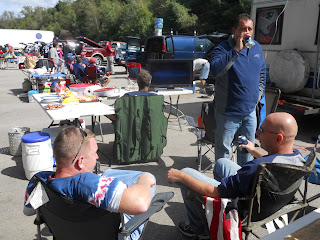 Moving towards the stadium up Route One in a parking lot next to a liquor store and a Subway is one of the most talented and creative tailgaters you’ll find. New Hampshire resident Kenny Kehoe constructed a most sophisticated tailgating trailer out of a leaf carrier from his landscaping business. Complete with two gas grills, AstroTurf carpeting, two flag holders, and extensive storage for food, tables, chairs, utensils, first aid, and other gear, this trailer carries everything needed for a tailgate of 20 friends. Immaculately painted in Patriots Red with a large Pat Patriot logo, the trailer also displays tickets from various games that Kenny and his group have attended over the years. His group comes from five different New England states, and has been attending games for 17 years.  There is also a shrine on the trailer to a member of their group, Keith Angellini, who recently passed away. Building the trailer was a labor of love for Kehoe, so much that he even had it patented. The entertainment that followed however was even more impressive. Bagpipers are not easy to find anywhere, much less at a professional football game, but this was yet another skill Kehoe could add to his list of talents. He played full versions of “When the Saints Go Marching In” and “Oh Danny Boy.” Nearly half the parking lot came to their feet and chanted “encore, encore.” As impressive as the food display was it this tailgate with Swedish meatballs and foot long deli hot dogs as the main dishes, it was merely an afterthought to this unique experience. Kehoe mentioned that most important aspect of this experience is the lasting friendships he has found. “We are a close knit group,” he said. “We genuinely care about each other, and will remain friends for a long time.” 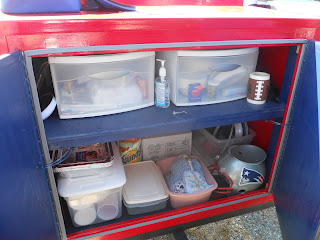 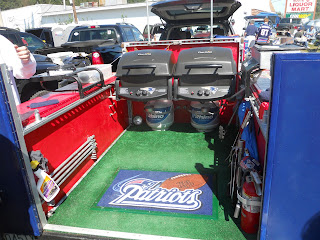 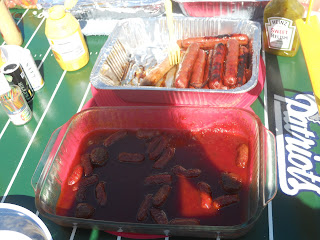 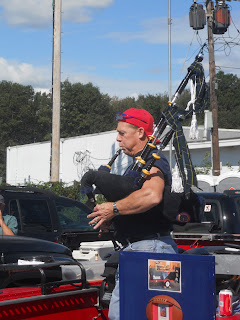 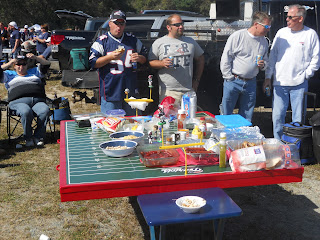 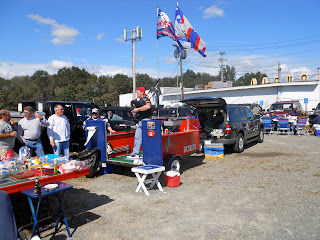 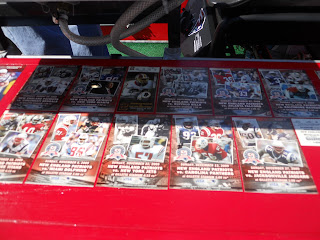 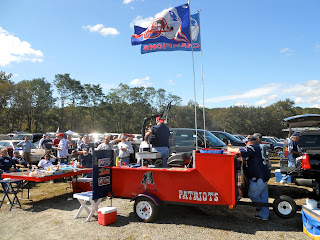 Jim Pierce of Woburn was one of the first arrivals to the Gillette Stadium parking lot on Opening Day. His group consisted of 20 friends on this day, but he has organized a groups of 70 to see the Patriots play the Dolphins in Miami. This tailgate featured a list of cuisine that would make many restaurants green with envy. Buffalo wings, giant Italian subs, chicken parmesan, antipasto, Chinese spare ribs, and delectable desserts adorned three large picnic tables. The main attraction at this tailgate was a battle of the beanbag tailgate game cornhole. Yes, that is what the game is called and the competitive nature of this game was second to none with four teams of five players vying to win. This game is seen throughout stadium and outside parking lots in Foxboro, and is welcome recreational opportunity while sitting or standing in a parking lot for four hors or more. 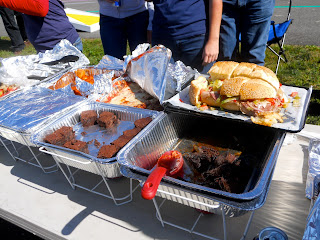 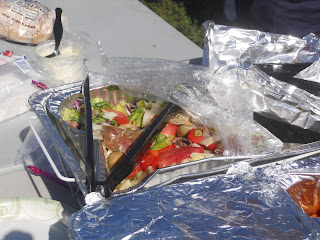 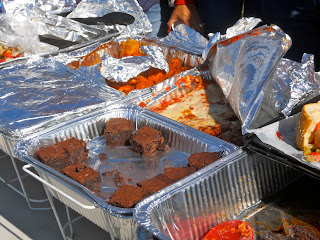 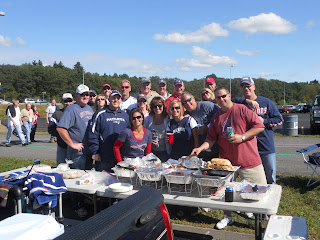 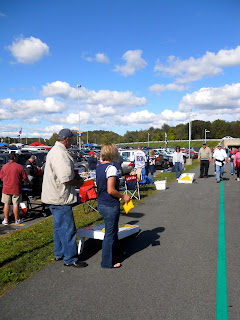 There are many aspects that go into the perfect tailgate. But as it turns out, the food, the games, the vehicles, the memorabilia, the libations, and other logistics that come in to play all take a back seat to the most important ingredient in a great tailgate; friendships. The Patriots create excitement, loyalty, and passion, but the friendships of the tailgaters are what mattered most, and this was the reason why fans endure early Sunday mornings, long rides, and considerable financial expense to create these elaborate celebrations. 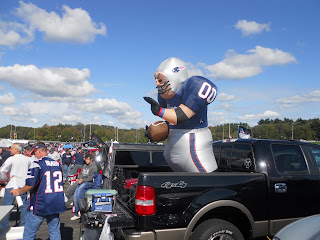 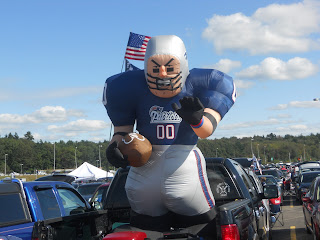 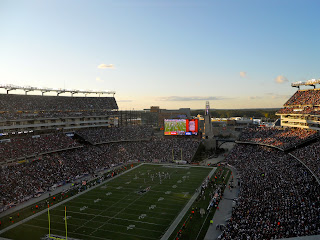 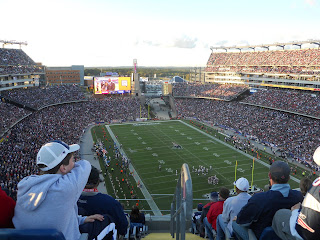 Posted by MattyT at 9:08 AM No comments: