I now know how those fans felt in Green Bay on New Years Eve in 1967. The temperature for the Ice Bowl game between Dallas and Green Bay was -15 degrees that day at game time. At Rentschler Field in East Hartford, I attended the Whale Bowl on Saturday. The temperature at the Rent was a balmy 25 degrees in comparison, but the wind was unlike anything I have ever felt. They might as well have played the game atop Mount Washington in New Hampshire. The windchill dropped the temperature to about -10 degrees, and it never let up through the 4.5 hours I was there. 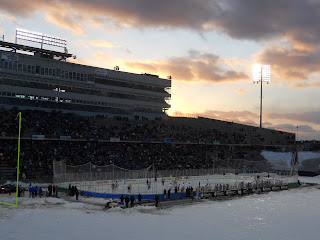 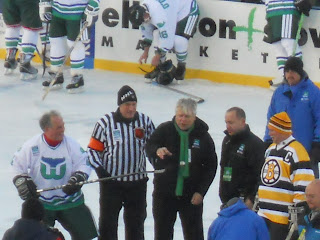 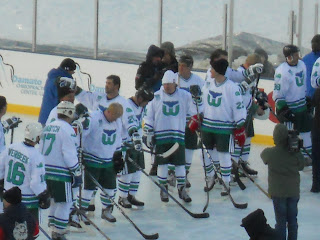 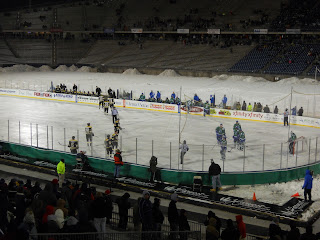 I drove the 80 miles from my house in Massachusetts to show my support for the rebranded AHL Connecticut Whale, to see some Whaler and Bruin legends, and to show the NHL that Hartford deserves a franchise more than places like Nashville, Phoenix, Sunrise, Florida, and yes even Raleigh. The Bruins-Whalers legends/celebrity game was a blast. I remember watching Pat Verbeek, Nelson Emerson, Scott Daniels, and the Babych brothers on Sportschannel New England. Rick Middleton, Reggie Lemelin, Lyndon Byers, Brad Park, Craig Janney, and Ken Linseman were Bruins players I used to watch on TV 38 during those successful years in 80s. It was great to see all of them again. I even saw my favorite New York Ranger and Connecticut native Brian Leetch. I have to say I was disappointed with the amount of empty seats I saw. In fairness, the wind was such a factor, and was nearly unbearable. I have been a Patriots season ticket holder for nearly fifteen years, and not a single game at either Gillette or the old Foxboro Stadium had wind whip through the stands like this. I can't even remember a ski trip with winds that strong. Most of the conversations I had with other fans were held in the Men's Room. Souveneirs were blowing off tables, and I had to chase my hat through the concourse at least a half dozen times. The stadium was filled with red faces, shivering knees, and brave souls. Nonetheless, it is possible that Jeff Jacobs was right when he mentioned in his column Sunday that Connecticut may have missed an opportunity to showcase Hartford as a major player for the return of the NHL.

I have lived in Boston for more than 80 percent of my life, yet the Whalers always have and always will be my team. I loved the atmosphere at the Civic Center. The Whalers had a good thing going in the 80's with players like Ron Francis, Pat Verbeek, Kevin Dineen, Mike Liut, and Ulfie Samuelson. Poor personnel decisions and management after Mr. Baldwin left the team brought the franchise to its knees as we all know. The two hour drive to see a game never bothered me because I felt like I was watching a game with 14,000 friends and neighbors. Brass Bonanza gave our team an identity, and it is still used at Fenway Park today. I used to see players meeting with fans after games and at local hangouts in downtown Hartford. We loved the players, and they loved the fans. Howard Baldwin owned the franchise in its 80s heyday and he knows the franchise should never have been moved to Carolina by that bandit with the ponytail. The games were also affordable and accessible to most. The team wasn't overly successful, but there were moments: Kevin Dineen's game winning goal against the Canadiens in 1986, Dave Babych's game tying goal in Game 7 vs. Montreal in '86, Yvon Corriveau's game winner against the Habs in the 1992 playoffs, and the nine goals scored in the clinching game of the Whale's loan playoff series win. I have taken a lot of grief from Bruins fans in my life, but I know Howard Baldwin cares more about his fan base than the Jacobs family ever will. More on Bruins fans in my next post.

The truth is I think Gary Bettman would have to leave his position in order for Hartford to get a franchise. Winnipeg and Quebec are also great hockey cities bidding to get teams. It's an uphill battle and I hope Hartford gets another chance to show the support that I saw for 18 seasons that it was an NHL city. I wish the 6,000+ that paid, but missed out on this great day had shown up. But I also know that if there is a chance to fill an arena indoors for 81 games, Hartford will do it. I witnessed it. I also know there is no way in this world that the so-called "Caniacs" would have endured those conditions for an NHL game, much less an AHL game.The rebranded Whale is drawing well, and playing exciting hockey. I always wonder what we could have witnessed in Hartford had Pete Karmanos not pulled the rug out from under us. Neither the Bruins nor the Rangers have even qualified for the Stanley Cup semifinal round since the Whalers left town. I think we would we would have had a lot of new fans and excitement in Hartford with two finals appearances and one Stanley Cup.

Keep the faith Whalers and Whale fans. Howard Baldwin is a smart, passionate and influential man. He is one of the few owners that has the fans interest in mind. He put Hartford NHL hockey on the map. We need to help him bring it back.
Posted by MattyT at 10:55 PM