Memories of the Marathon in the Greatest City in the World 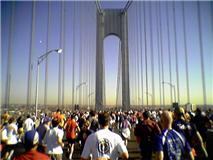 It's hard to believe it has been six years since I ran 26.2 miles through the streets of the greatest city in the world. Flipping through the channels last Sunday, I found national coverage of the New York City Marathon after I could no longer stand watching the Patriots get a first class beatdown from the Browns.

So many memories popped into my head as I watched the runners navigate the streets of the city's five boroughs. I found this picture rooting through my emails last Sunday. It was taken about a half mile from the starting gate on the Verrazano Narrows Bridge, what was once the longest suspension bridge in the world. By that point, my nerves had subsided somewhat, and my focus was to do whatever it took to reach the finish line, and the embrace of my girlfriend and friends. The bus ride to the start in Staten Island was difficult to say the least. We sat in traffic as construction blocked one of the lanes along the Brooklyn-Queens Expressway. Every moment that went by, my stomach continued to churn as I looked from a high point on the expressway down to where I would be running. Most of the course was visible from this point, and as I looked toward the bridges I would be climbing through morning haze, I wondered what I had gotten myself into. To add the tension, I was sitting next to some former coworkers and the CEO of a company that had just laid me off a year earlier. The start couldn't come soon enough.

As I got off the bus in Staten Island, the sun was out, the temperature was already at 60 degrees, and the energy from the 35,000 runners was contagious. I was able to calm myself through some deep breaths, stretching, and encouragement from my former coworkers and fellow runners. As the gun sounded, I watched the thousands of runners in front of me head towards the bridge as if they were chasing a pickpocket, not an uncommon occurrence in New York.  I was amazed at how organized the chaos was, however. Not once did anybody step on me or knock me over like they do in Times Square or Grand Central. The scene of the bridge filling up with runners is a sight that no other city can match.

As I crossed the bridge into Brooklyn, my muscles were warm and I was planning my strategy of how to  pace myself and reserve energy for the steep climbs over the Queensboro Bridge, Willis Avenue Bridge, and the hill up Fifth Avenue in Harlem. Running up Fourth Avenue in Brooklyn, I approached Sunset Park where an entire block of fans were blasting the Beastie Boys song "No Sleep Till Brooklyn." I had to contain myself from all the adrenaline I felt from the song and fan support. I still had over 20 miles left! What a great moment though. It helped push me through the rest of Brooklyn and Queens until I arrived at the Queensboro into Manhattan. One regret I do have is not taking in more of my surroundings like the neighborhoods in Brooklyn, the Manhattan skyline from the Pulaski Bridge at the halfway point, and even the foliage in Central Park. The finish line was all that mattered.

At the entrance of the bridge into Manhattan, I inhaled 2 packets of goo for a little energy as I prepared for the climb. Then memorable moment number two took place. Many times New Yorkers think nothing of public urination, but this time was different. A runner dressed in a full Scooby Doo costume ran past me to a wall, slightly hidden, and urinated. This man not only found a way to urinate without fully taking off his costume, but he ran the full 26.2 miles with 20 extra pounds on his body. Seems like a lot of extra effort in an already grueling day with temperatures topping 70 degrees. One of the funniest things I have ever seen.

I had to stop and walk after crossing the bridge into Manhattan as the cramps were starting to kick in. The fans are the loudest on First Avenue, but the sun, muscle cramps, and blisters were taking their toll. As I ran up the sun-drenched pavement of First Avenue, I was looking for my next source of motivation. After I downed a Tylenol 8 hour pill, I crossed the Willis Avenue Bridge into the Bronx where my cell phone rang a couple of times with well wishes from friends. There is only one mile of the marathon run through the Bronx, but that's where I heard someone yell, "Coach Matt, Coach Matt." One of the students I coached at an afterschool track program in the Bronx a year earlier had found me, and handed me some water. That was the motivation I needed as the last 6.2 miles took every ounce of energy, endurance, pain tolerance, and perseverance I had left. These are the moments that matter most at times like these. There was more walking up the hills of 5th Avenue, but I knew Tavern on The Green was near. I was ready to conquer the 26.2 mile monster. The last 10K took over an hour and a half, but I crossed the finish line just under 5 hours with my arms raised in the air and my girlfriend waiting for me with open arms. I did it.

I celebrated that night hard with my girlfriend, my cousin, and my two close friends, and we still talk about that day often. That was the day I decided that I had found my future wife.  After all the support, eliminating my doubts, and watching her climb a fence in front of the NYPD to greet me at the finish line, I knew Holly was for me even though I didn't propose for another two years. She didn't run or train for a single mile with me, but I couldn't have finished without her. I should also mention my friends Jay and Kerry who drove to NYC with us to watch the race, and encouraged me throughout my training.

My final memory was an ovation I received as I entered a small Mexican restaurant near Central Park. I couldn't believe it. These are things I remember most over the difficult days of training and doing long runs by myself. It's an experience unlike any other I've had in my life, and something that only New York could provide. Boston forces runners to qualify with difficult times, and even then, that's not a guarantee to get in. I highly recommend the NYC Marathon. There is no better way to see New York, if you're up to it.
Posted by MattyT at 11:41 PM