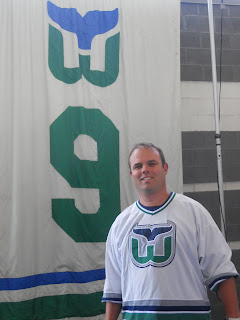 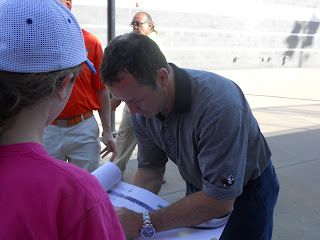 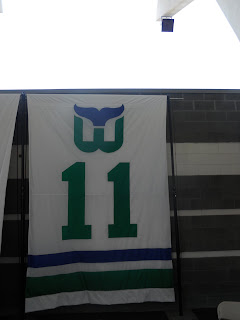 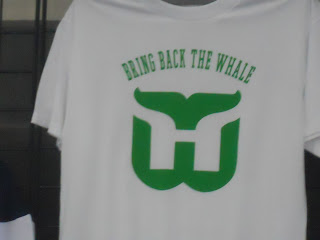 I remember many things on my frequent travels down Interstate 84 to see my favorite hockey team in Hartford. Some of the memories include:


Mostly I remember seeing the players—on the ice and off. Kevin Dineen, Geoff Sanderson, Pat Verbeek, Ron Francis, Dave Babych, Mike Liut, Joel Quenneville. The Whalers were accessible to their fans and their community—something not seen too often in Boston or anywhere else for that matter. It was a special relationship that ended 13 years ago, and many fans, including yours truly, have never had that void filled. I have visited Brooklyn, New York many times and have spoken with locals regarding the departure of their beloved Dodgers. Many will disagree, but I think the pain many Whalers fans feel is comparable.
I have received a lot of grief from Bruins fans in the past and present , and heard many nicknames given to the Whale including: "The Hartford Failures"and "Fudgy the Whalers" just to name a few. Of course the Bruins haven't made it past the second round of the playoffs for 18 years—just as the Whalers failed to do in their 18 years in the NHL.
I chose to cut ties with the franchise after they moved to the "hockey hotbed" of Raleigh, North Carolina. For the last 13 years I have rooted primarily for the New York Rangers because I lived in NYC for two years, and because of my dislike for Bruins ownership that still exists today.  Neither the Rangers, nor the Bruins have reached the third round of the Stanley Cup Playoffs since 1997. The Hurrricanes have been to the Stanley Cup Finals twice, the semifinals three times, and a Stanley Cup Championship on their resume since moving south. I can't help but think about how many Whaler fans would have sprouted from Western Mass and all over New England with that type of success. After all, I felt like the 2006 Championship team really belonged to Hartford.

The Whalers have a rich history throughout the region and not just Hartford. They were known as the New England Whalers when the franchise was created in 1972 and played at the old Boston Garden in the old World Hockey Association(WHA).  Paul Hurley of Melrose, Larry Pleau of Lynn, and John Cuniff of South Boston all played on that first Whalers team in addition to playing on the 1968 US Olympic Team in Grenoble, France.

If the Hartford Whalers ever come back to the NHL, my wife thinks the fans should own the team. We won't call them "The People's Team" obviously, but she thinks the people should own the team and hire the right people to make the decisions, and not a liar like current Hurricanes and former Whalers owner Peter Karmanos. She has a good idea. What she doesn't know however, is that in many ways the Whalers already are the "People's Team".  That was never more evident than this past Saturday as former Whalers owner and film producer Howard Baldwin organized a Whalers Fan Fest at Rentschler Field in East Hartford. I made the two hour drive to meet the Whalers greatest players, executives, and fans.  Almost 5,000 people in all gathered to spike interest in bringing NHL hockey back to the insurance city.

The wait was more than 3 hours for autographs to meet players, but almost every one of them stuck around to sign posters and memorabilia for loyal fans. Many whaler greats made the trip: Ron Francis, Kevin Dineen, Dave Babych, Chuck Kaiton, Joel Quenneville—even Mr. Hockey Gordie Howe was there. He would only sign his book for a fee, of which half went to local charities, but it was small price to pay to see one of hockey's three greatest players. I left around 5:30 and Chuck Kaiton, the Babych brothers, and other players were still there after 6 plus hours of signing autographs. Players were supposed to finish signing around 2:30 in the afternoon. There was no complaining from players or fans, just appreciation and gratitude for loyalty of a fallen, but not forgotten franchise. It was worth every minute of the 2 hour drive through traffic to Rentschler Field in East Hartford. In all truthfulness I would have a few more distractions while I waited in line like highlights from old games, food and drink vendors making rounds, maybe even some interactive games or contests. But all in all it was great day meeting my favorite Hartford Hockey Heroes. Howard Baldwin,  the Whalers first owner, looks to bring the franchise back by first taking over operations of the AHL Wolfpack and renaming them the Connecticut Whalers. He is also throwing a huge celebration in February similar to the Winter Classic, with Alumni games pitting former Whalers against Bruins legends among other activities. He'll be Hockey Hero #1 if he can get the NHL back to the Insurance city.
Posted by MattyT at 12:08 PM