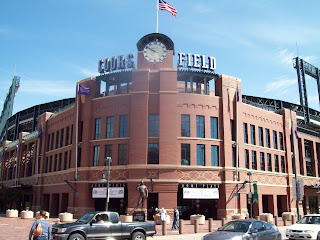 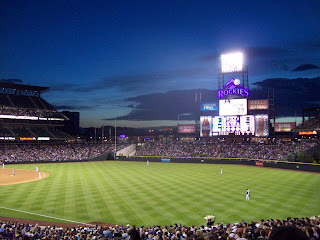 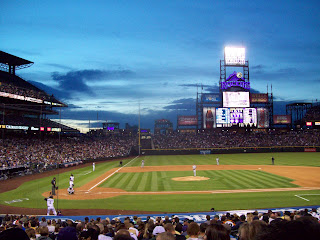 There are so many things that are nice about Colorado; the scenery and natural beauty, the friendly people, the fresh food and cold beer, and the facilities. Colorado really does it right with taxpayer money. There are bikepaths everywhere, new high schools with modern facilties, recreation centers with tons of activities, wide roads with no potholes, and state and national parks that are second to none. Denver is a sports town that's second to none with a phenominal baseball venue to prove it.

HOK Architecture created another masterpiece in Coors Field. Just about every detail was carefully planned in this ballpark from the landscape in centerfield with pinetrees, waterfalls, and fountains, to the spectacular view of the Rocky Mountains in left field, and a sunset that is unmatched by any MLB park. The main entrance at the corner of 20th and Blake Street is reminiscent of Ebbets Field in Brooklyn. It is constructed of hand-laid brick with an old fashioned clock at the top. Adding to Coors Field's history is the fact that 66 million year old dinosaur bones were discovered beneath the Blake Street location. They do have a silly looking mascot named Dinger the Dinosaur that resulted from this discovery. Most of the seats at Coors Field are dark green, but there is a row of purple seats in the upper deck in right field that marks the exact point that fans are 1 mile above sea level. Coors has one of the larger capacities(50,449) of the new ballparks due to the fact that the Rockies were regularly selling out 80,000 seat Mile High Stadium in their first two years of existence in 1993 and 1994. The Rockpile is the bleacher section in centerfield that was first conceived at Mile High and brought over to Coors Field. They are a ways from the field, but if you are 55 are older or 12 and younger, you can buy these tickets the day of the game for A BUCK!!! Try doing that at Fenway!

Even with some of the features that bring fans back to 1940's era of open air ballparks, Coors Field has a number of amenities necessary to accomodate modern day baseball. The field can drain over five inches of water in one hour, and the grass is heated to melt snow from the unpredictable weather months of April and October. There is even an area to bring fans to safety in case of a tornado. Yes they do happen, and the day before my tour, the tornado siren sounded at Coors Field for the first time.

Food and drink choices are endless at Coors Field. The Blue Moon Brewery is attached to the ballpark with their signature Belgian wheat beer and pub grub. The Mountain Ranch Bar and Grille is located in right field with casual and fine dining options. There's a good view of the field and a lot of memorabilia and references to the 2007 World Series. This is one of the aspects of Coors that Bostonians will enjoy more than any other, as we celebrated a sweep of this World Series right on the field. I enjoyed a "Rockie Dog", a giant hot dog with peppers, onions, sourkraut, relish, and mustard. There are also Buffalo burgers, gourmet pizza, Denver Cheesesteaks, and even Rocky Mountain Oysters. These are good, if you have the BALLS to eat them. There is a kids area called Buckaroos that serves kids sized portions in case your child doesn't want to eat a 2ft hot dog. The longest line for food that I saw was for tornadoughs. These are pretzels covered with cinnamon sugar, powdered sugar and other toppings; fantastic. There's even salad stand for those men who want a beating for eating a salad at a ballgame. Believe it or not, you can bring food and water into the ballpark. Make sure while in CO to drink water as the altitude can give you a headache or worse. After the game, the LoDo area (Lower Downtown) has a number of great bars to tie one on after the game. I recommend one of the bars with an outdoor patio or the Chophouse(great steaks!)

I know many of you think that the scores at Coors rival those of Bronco games. Not so much anymore. The humidor where they store baseballs before the game has considerably cut down on home runs. Coors has altitude 6% higher than any other park in baseball, so the outfield is 4% larger. What hasn't changed is the fact that a curveball does not break as sharply at Coors. This would explain why pitchers Mike Hampton, Darryl Kile, and Denny Neagle did not succeed despite huge contracts. Pitchers from the Rockies farm system have fared better from learning to pitch in nearby Colorado Springs. Keeping the ball low is key. For the record, there were no home runs in the game I saw. If there is a Rockies Home Run, the 40 foot fountains in centerfield erupt.

My seats were 15 rows up from the field with a view of the sunset in left field and the Rocky Mountains. A hundred bucks got me two field level seats; pretty good considering you could pay $150 a seat to sit in front of a poll at Fenway vs. the Yankees. Not that I ever did that.The Rockies completed their 10th straight win, and I might gave seen my last glimpse of Ken Griffey Jr. as the Mariners visited Colorado. The ushers and police officers are helpful and actually want to answer your question. Convenience is the rule at Coors Field as it is located right off I-25 and close to a light rail public transit station. There is also plenty of parking for $5!!!!! In Boston you can park 1/8 of a car for 5 bucks. In short, for those of you who plan your vacation around the Red Sox travel plans, or you just want to see a ballgame in a great facility, with perfect weather, and a friendly atmosphere, do not miss Coors Field.
Posted by MattyT at 9:37 PM