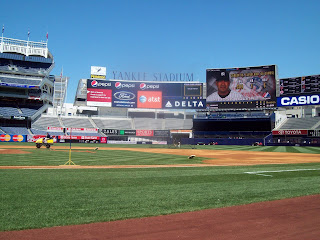 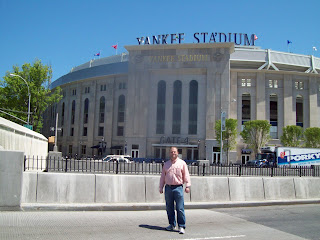 I know we all hate the Yankees here in Boston, but I had to see what 1 billion dollars buys you in a stadium. One thing it doesn't buy you is hospitality from Yankee employees. I went to two Yankee Clubhouse stores in Manhattan to buy a ticket for a tour. Both told me their ticket machines were down, but that I should be able to buy a ticket at the stadium, and that they usually don't sell out. Well of course that day's tour did sell out, and after waiting 20 minutes in line at the stadium, the one employee would not sell me a ticket for the next day. I called Ticketmaster and paid $10 in surcharges to buy a $20 tour ticket. Because I'm writing a magazine piece scheduled to run in October, the Yankees wanted me to go through their media relations department who wouldn't answer my calls or give me a free tour. Sure, I'll run my first draft by them after their next World Series victory(LOL). I can't imagine how I would have been treated if I gave the slightest hint that I am a Red Sox fan.

The tour was pretty good, although the first thing they was that there are"more don'ts than dos". In other words, no videos of any kind, flash photography etc.. The thing this security guard said more than anything else is, "We'll ask you to leave".

So how would I describe the new Yankee Stadium? Well, in the Yankee museum there is a shrine to Babe Ruth which quotes him as saying, "I swing big with everything In got. I hit big, and I miss big. I like to live as big as I can." That's the way I would describe Yankee Stadium, BIG. There is a huge open concourse as you walk in the stadium with photographs of various Yankee greats. The biggest thing you see is the guitar from Hard Rock Cafe located inside the stadium. The museum has statues of Don Larsen and Yogi Berra 60 feet 6 inches apart commemorating the only World Series perfect game. In that 60ft 6" of space is hundreds of autgraphed baseballs signed by Yankee greats. Thurman Munson's locker was also moved from thr original stadium and is worth seeing. There are also vintage Yankee photographs from the NY Daily News that were never released before.

The new Yankee Stadium doesn't carry the Yankee aura that the old yard had. It has an aura of corporate America and particularly the Steinbrenners. It's overwhelming, overpriced, and ostentatious. It's clean and nice and well built, as it ought to be for 1 billion dollars. But Monument Park is tucked in a corner of centerfield and is not even visible from most areas of the stadium. To me, that was a defining feature of Yankee Stadium. The things that were focused on most in the tour were the 1100 tv monitors throughout the stadium, the largest diamond vision scoreboard in baseball, and the largest ribbon scoreboard across the stadium. It's something to see for sure, but be sure to bring $ as front row seats are over $1000. And as a fan told me at the ticket line, "These are the corporate Yankees now". Hopefully Citi Field Queens will be a more enjoyable option.
Posted by MattyT at 1:34 PM