I have only been to Staten Island 3 times. The first time I stood at the starting line of the NYC Marathon with 35,000 runners waiting to tackle the 26.2 mile monster. The second time, I wanted to experience the city's best free attraction, the Staten Island Ferry. Last week I witnessed how resilient the people of this borough are when I traveled to the Midland Beach section to help with the cleanup of Hurricane Sandy.

Staten Island is often referred to as the "forgotten borough" by many publications and wikipedia. This was certainly the case in the wake of Hurricane Sandy. Mayor Bloomberg, FEMA, and the Red Cross all took their sweet time sending help to Staten Island after this storm, even though more the half of New York's casualties from the storm occurred on Staten Island. NBC did a report on the desperation officials and residents felt.

After taking the ferry to the island and making my first trip on a New York City bus to Midland Beach, I witnessed the devastation and anger firsthand as I took pictures of the wreckage. This house had its roof blown off, and these 3 men were none to happy that I was taking pictures. They approached me like they wanted to drop the gloves and go at it. But once I told them I was volunteer and a writer looking to help, we talked for 10 minutes. 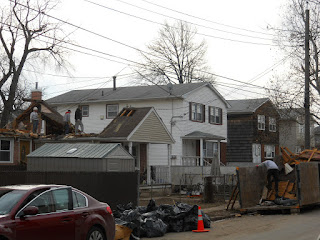 I've always believed New Yorkers are more approachable and amicable than Bostonians, and my experience in Staten Island didn't change that belief.

I volunteered through Occupy Sandy as their group was far and away the best at finding work, distributing supplies, and meeting with residents. Regardless of whether you like the politics and the methods of the Occupy movement, they have done an amazing job at gathering supplies, food, water, tools, and building materials desperately needed by residents. Occupy Sandy has set up an account on Amazon similar to a wedding registry where people can choose gifts to send to Occupy's headquarters. This is a small sample of what they were able to gather. 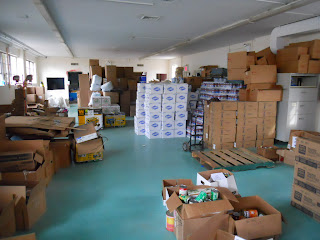 After loading water and supplies into the Occupy Staten Island headquarters, I was sent to Bob Dennis' house nine blocks away with my new friend Dave from Colorado. We spent more than 5 hours demolishing a basement that had been flooded with eight feet of water. This was truly one of the most memorable days of my life. I was amazed at Bob's positive attitude through such difficult times, and I was also touched by David's generosity taking time off of work and coming to New York from Colorado. After having dinner with my two newest friends, Bob drove me 10 miles back to the ferry for my journey back to Boston. Not even my car overheating on the Merritt Parkway in the dark on my way back to Marlboro could dampen my spirits on this day. Hopefully I'll have a chance to go back. 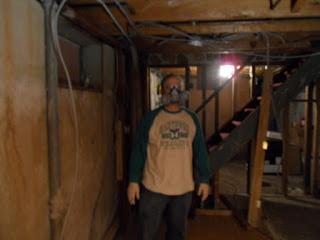 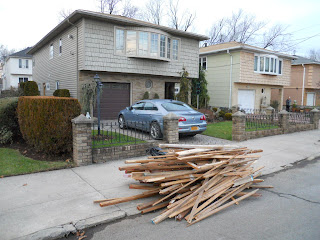 These pictures above are of Bob's house.


My new friends: Dave on the left, Bob on the right 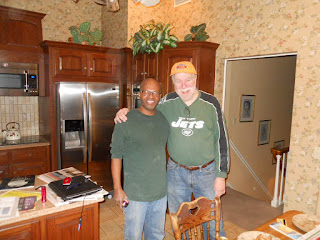