Our National Pastime in the Nation's Capital

Baseball returned to our nation's capital in 2005 with the relocation of the Montreal Expos. After 3 years in old RFK stadium, the Nationals moved into a beautiful new, green facility. Here is the best and worst of the ballpark.

1) Friendly customer service
I talk about this a lot since it isn't the rule at my home ballpark, Fenway. How often do you see someone like this standing at the entrance of the ballpark. Caught me eye right away. The Red Sox might want to take some cues from this since the team fell flat on its face in September. 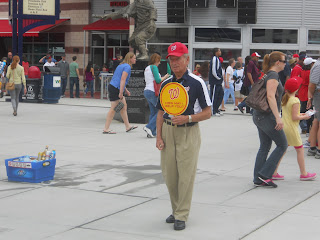 2) Accessibility
I was able to walk to every section, every level of this ballpark with the exception of club seats. I was able to find great views in and outside the ballpark, in addition to all non-club restaurants, concessions, and exhibits. I had great seats in left field for $26 too. Here are just a few of the views in and around the ballpark. 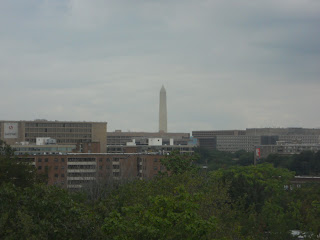 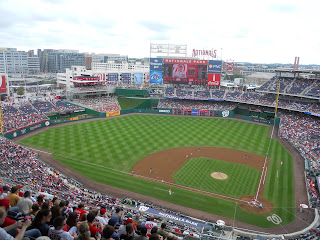 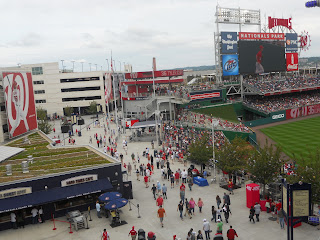 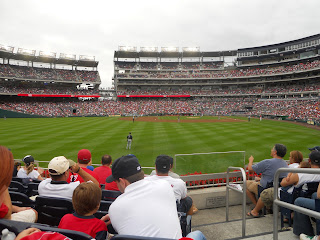 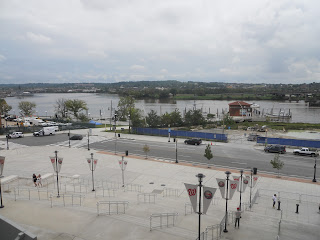 3) Food
Very good and very creative. I liked the pretzel shaped like the Nats logo. Even better, however, was a new taste combination I found: sprinkling Old Bay seasoning on the pretzel. Old Bay is a Maryland staple and widely used on Maryland crabcakes and blue crabs. You won't find Old Bay at ballparks other than Nationals Park and Camden Yards. Delicious! Also great is the Shake Shack in the Center Field concourse. Shake Shack is popular at Citi Field. The Shack-cago Dog is the best. It's a hot dog on a potato bun with Shake Shack relish, onion, cucumber, tomato, pickle, celery salt, and mustard. Yum! 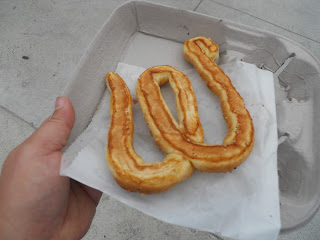 4) The Red Porch
A very cool bar above left center field with a great view of the game. Highly recommended. 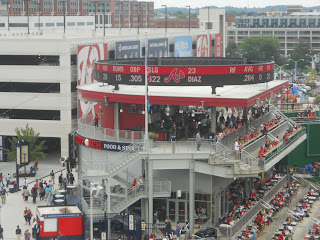 5) History
Despite the fact there was no baseball in DC for 34 years after the second version of the Senators moved to Texas and became the Rangers, Washington baseball history dates back to 1891, and Nationals Park does a great job documenting it. Statues of Frank Howard(Senators franchise home run leader), Josh Gibson of the Washington Homestead Grays and arguably the greatest Negro League ballplayer, and Walter Johnson, winner of 417 games and 10 straight seasons of 20+ wins adorn the left field concourse. The ring of honor above homeplate honors players from both versions of the Washington Senators, Montreal Expos, and the Homestead Grays of the Negro Leagues.   And of course, you can't talk about history without mentioning the Presidents Race. See below. 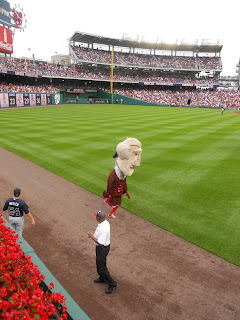 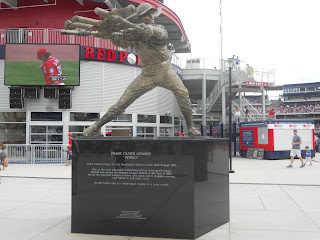 6) The First Green Ballpark in America
Nationals Park uses low emitting materials in the carpets, paint, and adhesives around the ballpark. They also use recycled construction materials and sustainable design elements. Most of all, the Nats pay particular attention to storm water management and minimizing water pollution in the adjacent Anacostia River. This may not be something that's readily seen at the ballpark, but I think it's one of the best features of Nationals Park, and many other venues have followed its lead, including Gillette Stadium in Foxborough. 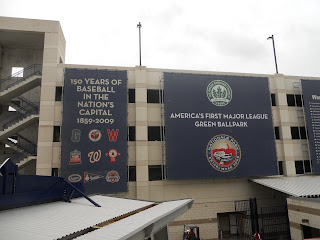 Now the not so good:

1) Parking and traffic
Traffic is a nightmare in DC. Worse than Boston. Parking is more expensive than Fenway at $40 and $25. I think there might be a $15 lot around, but this is a bad economy, that has to change.

2) Surrounding the Park
It's a good location for a ballpark, but there's not much there at all in terms of restaurants, bars etc. Good thing the ballpark takes care of that.