A Ride Up Route 103 in Vermont 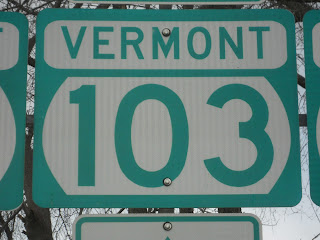 My wife gets nervous when she travels with me for two reasons. First, she's a nervous person to begin with. Second, I tend to take in a lot of scenery while I am driving along back roads and two-lane highways in the country. This was the case as we drove up Route 103 in Vermont. It's probably not the best idea to gawk at barns, rushing rivers, and covered bridges while you're driving, but you can miss a lot if you don't slow down, or pull over and stop, and take in what's around you. Route 103 isn't recognized as much as some of Vermont's other scenic byways, but with four covered bridges, The Vermont Country Store, and the small towns of Chester, Rockingham, Cavendish, and Ludlow along the route, there's a lot to see and do. I always seem to to come across a number of outrageous places, adventures, or people during my travels, and this trip was no exception.

Holly and I took advantage of a great deal through the Living Social website in which we received two nights stay at the Castle Hill Resort near Ludlow, two $25 vouchers towards a massage, and a $25 voucher towards dinner at their high-end restaurant.  The hotel is on Route 103, and I thought I would see what the small towns along this route had to offer. First up was the Vermont Country Store just outside of Bellows Falls. The store prides themselves on providing hard-to-find items in addition to local specialities. I have to say they deliver on that promise, even if there products are little steep in price. You can find anything from Fartless 16-bean soup to fine chocolates, or a sock monkey in a box to go with your bottle of Anti-Monkey Butt Powder. You get the idea. The selection of cheeses, candies, and syrups is extensive, if overpriced, but definitely worth checking out. There is also a covered bridge next to the parking lot that adds a little local flavor to this Green Mountain state original. I have always been amazed that these bridges still exist. Most of them are primitive, yet beautiful structures, that have withstood floods, storms, and other punishment Mother Nature can dish out. They remind you of a less complicated era, and serve as a perfect backdrop for photos of fall foliage, rolling rivers, or winter wonderlands. 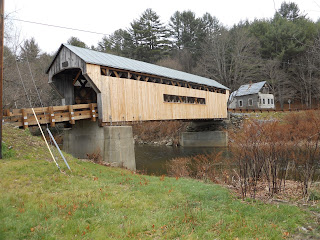 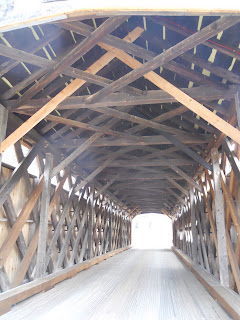 The Worrall Covered Bridge is the first bridge you can see about one mile from the Vermont Country Store on Williams Road off of 103. Cross a railroad bridge and follow the dirt road past an old rustic auto repair shop and the bridge crosses the Williams River next to a railroad bridge. An open corn field surrounds Williams Road and the bridge, and the railroad bridge dominates the landscape about 100 yards downstream. My wife looked at me with bewilderment as she watched me stumble on the railroad bridge with uneven tracks and railroad ties and the rushing river below to get a better picture of the Worrall Covered Bridge. Such is the life being married to a curious and adventurous travel writer, and recreational photographer.  On a side note, this bridge was just recently refurbished in 2009, and the Vermont Department of Transportation does a fantastic job preserving these architectural treasures that are not only aesthetically pleasing, but handle a large amount of traffic as well. 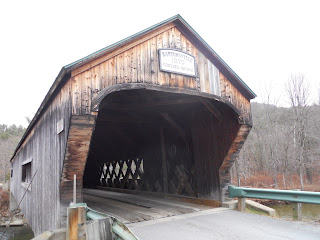 About a half mile upstream is the Bartonsville Bridge on Lower Bartonsville Road. At 159 feet, this is one of the longer covered bridges in the area, and was restored with major repairs in 1983. Photographing this bridge wasn't easy as steady traffic used the bridge, and the Green Mountain Railroad was passing in front of the bridge as well. There are a total of four covered bridges in the town of Rockingham, with Route 103 providing direct access to three of them.

Next up on Route 103 is the town of Chester, famous for its small historic village of houses made of local granite. Four of the houses are listed on the National Register of Historic Places. A nineteenth century railroad station also gives visitors the ability to visualize a simpler time. After passing a number of local stores and churches, Route 103 leaves Chester, and takes travelers past some weathered barns with old business signs probably seen at filling stations in the fifties. The mountains and the Williams River provide a peaceful scenic vista as you enter the town of Cavendish and the village of Proctorsville. This is where I found some VERY unusual landmarks of Vermont's rural culture. Here are just a few examples. 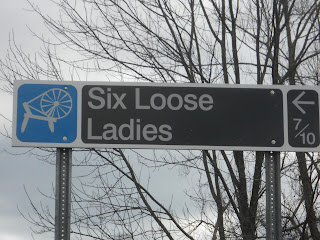 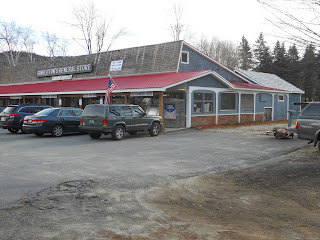 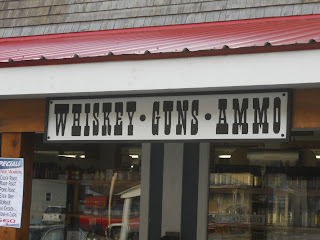 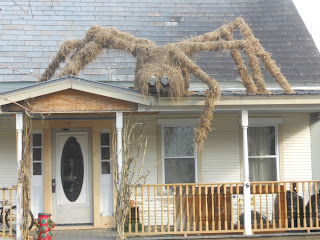 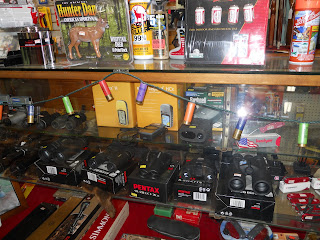 There is an expression "pictures say a thousand words." That would apply to these photos and the village of Proctorsville. Our hotel the Castle Hill Resort is on the outskirts of this village, so I had to take a trip into town to find what local recreational opportunities were available to us. Singletons General Store attracted me right away as soon as I saw that they sell guns, ammo, and whiskey. Adding to the ambiance was a dead deer carcass on a scale in the parking lot. You can see it in the photo of the store's parking lot. I have some ultra-conservative family members in Maryland, so I thought I would check and see if they had any whiskey, guns, and ammo gift baskets in the seasonal section of the store. I came up empty on that quest. It actually looked like they made some pretty tasty sandwiches inside, although I chose not to partake as I am not a fan of venison.  I particularly like the colorful shotgun shells posing as Christmas lights on the gift display case. Nothing says "Peace on Earth" and holiday cheer like colorful shotgun shells.

After leaving Singleton's, we took a short ride down Depot Street in Proctorsville where we crossed the Black River and passed a house with a giant spider made of hay that you see above. I'm not sure whether  that family's calendar is stuck on Halloween, but it must have taken a long time to make. Up the street on the left was the Vermont Apple Pie and Cheesecake Company.  Tucked in behind a couple of small residences on a gravel drive, this place serves the great breakfast you would expect in a typical country kitchen. Upon entering this establishment, we felt like we were dropping in on a family meal at a random house. You could actually hear someone lighting the gas burner on the stove from the dining area. The kitchen is adjacent to the dining room with shelves containing blenders, flour canisters, and scales, and the living room featured an old fashioned upright piano and pictures of family weddings, christenings, and vacations. The owner came to take our order clad in an apron, jeans, and a collared shirt with the collar stuck straight up in the air like in the movie Pretty In Pink. The meal started with the owner delivering a small dish of apples covered in freshly ground cinnamon. I have to say this was a nice touch before we ordered our Belgian waffles and blueberry pancakes. Holly ordered the whipped cream for the pancakes on the side, and as the owner brought the order into the kitchen, we heard someone ask"What do they mean by whipped cream on the SIDE?" We aren't their typical customers I guess. Anyway, the food was delicious and the owner was constantly in motion attending to his guests. Next time I go I'll order one of their pies. You can smell the freshly baked pies and goods as you enter the residence. Finally, I had to check out the business called Six Loose Ladies as we left Proctorsville. It is actually a yarn shop and fiber arts gallery that focuses on crafting everything from sweaters, socks, and shawls to quilted postcards, rugs, and handbags. I have to say I got a kick out of the highway sign directing drivers to Six Loose Ladies. 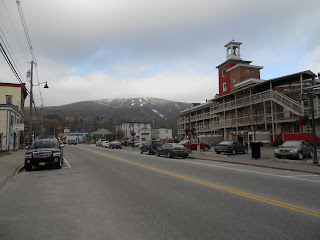 Ludlow is the next and last stop we made on Route 103. Ludlow is sophisticated enough to attract large numbers tourists and skiers with Okemo Mountain, yet it still maintains its small town charm with older mill buildings lining the Black River, and lots of art galleries, antique shops, bookstores, restaurants on Main Street. Sam's Steakhouse and DJ's were our favorite places to grab dinner. If you want to splurge, try the surf and turf option at Sam's Steaks with a dry aged sirloin topped with a fennel peppercorn crust and gorgonzola butter. Pair it with a crab cake and you have meal you'll remember for a long time. DJ's is a favorite local hangout with a good beer selection and a menu that's extensive if not inventive. The spicy meatball appetizer is fantastic. Ludlow offers snowmobiling and cross country skiing in addition to over 100 trails for downhill skiers and snowboarders in the winter. Spring, summer, and fall offer hiking, biking, fishing, swimming, and sightseeing in the middle of the scenic Green Mountains. Buttermilk Falls showcases three 15 foot cascading falls into a wide pool and swimming hole. It's a great place to spend a hot humid day in the summer. Our journey ended in Ludlow, but Route 103 moves further north to the towns of Mt. Holly, Wallingford and Clarendon on the way to Rutland. I'm sure there are more surprises to encounter on this underrated scenic road, but that will have to wait for another weekend or a longer vacation. Stay tuned.
Posted by MattyT at 10:24 PM